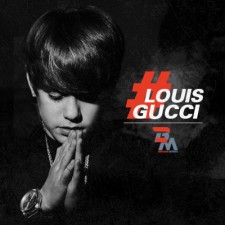 Breaking into the rap scene Morris stands out amongst the crowd. In his recent release of #LOUISGUCCI the artist brings a high level of energy to the brooding instrumentals, which incorporates eerie sounding church bells and orchestra tunes. The atmosphere he sets musically are sharply contrasted by the tight vocal production; his voice cutting through piercing the sound like a tidal wave.

The snare drum and hi-hat arrangements aren't much different from today's conventional rap, but they don't need to be: Bryson Morris performs over the track with a professional amount of confidence and infectious energy.

The rapper’s lyrics discuss his flamboyant lifestyle, a topic common among contemporary artists in the industry. The video’s affluent location parallels his lyrics about designer clothing and lavish jewelry. It is exceedingly difficult to take something that has been spoken about so many times and make it unique, but Bryson Morris seems to have no problem accomplishing this task. His tight lyrical flow and delivery are a testament to the time he commits to perfecting his sound.

Bryson's Morris' #LOUISGUCCI reviews received 5-star ratings, with one YouTube Influencer, Rhino, crediting the young rapper as being the next MattyB of Hip Hop. Another YouTuber, Ricky quotes Bryson Morris to be the next Jacob Sartorius.

Bryson Morris’ #LOUISGUCCI music video has accrued over 100,000 views in under a week. His fan base is continually expanding and brimming with positive reception to his music. The artist’s fans have shared that they are excited to follow along on his music journey and see where it takes him.

Bryson Morris began expressing his creative talent through music as early as age 11. Around this time, he independently engaged in research about the hip-hop scene and began formulating ideas to launch his career as an artist. As he honed his craft, he began to share his music with his classmates and followers on his social media accounts. When he was in seventh grade, one of his videos garnered over 28 million views, an outstanding number even by the highest industry standards.

Bryson Morris’ new website includes an online store where fans are able to buy hip hop clothing, which he anticipates will help him connect with fans as well as other artists. He plans to continue putting a lot of effort into his social media in order to share his sound with his listeners.

About Bryson Morris
Viral sensation, Bryson Morris began his career at an early age. Bryson became a budding Internet sensation, with a large following of fans discovering his sound through several social media platforms. In the 7th grade one of his debut videos reached 28 million views, asserting him as the next young hip-hop sensation! Bryson Morris brings uniqueness to the music industry.  Nobody in the market has a sound like Bryson Morris, as he is pioneering a new “off the path” sound that is different from what you hear today! Bryson is currently mixing a variety of new music in the studio to inspire and bring hope to his fans. For more on Bryson Morris and to check out his latest music visit http://brysonmorris.com/